Liverpool’s squad has been scaled-back somewhat during the transfer window, and despite a couple of absences, there are also a few players who are available to return to the fold. Ragnar Klavan and Adam Lallana will most likely not feature, but Alberto Moreno and Virgil Van Dijk could return. 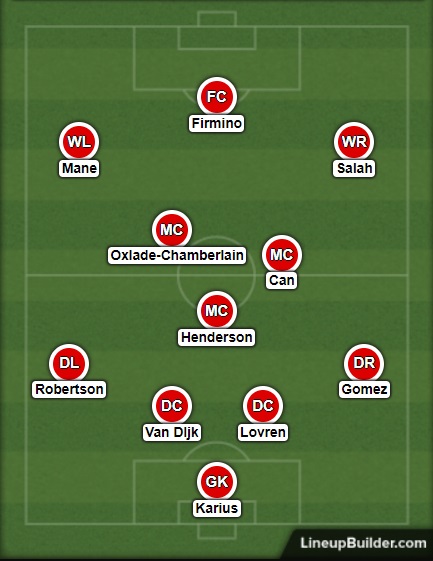 Loris Karius, Andy Robertson and Joe Gomez will retain their places, but the centre-back pairing could be changed. Joel Matip and Dejan Lovren helped to keep a clean sheet against Huddersfield, but it is hard to imagine that Jurgen Klopp would not pick Van Dijk if he is fit. The midfield will be the hardest area of the pitch to predict due to recently returned players as well as the form of others. Emre Can, Gini Wijnaldum and Alex Oxlade-Chamberlain have been hot and cold in the last few weeks, whereas both Jordan Henderson and James Milner greatly impressed in their first starts in a long time. There are arguments to be made for a number of midfield combinations here, but the one listed above is what I believe to be currently the strongest and is what Klopp will likely go with. The front three pick themselves despite Mane’s shaky form.

Tottenham will have also some returning players to potentially call on to make their return. The likes of Toby Alderweireld, Harry Winks and Serge Aurier have returned to training, but it is unknown whether this game will be too soon for all or some of them to feature. Spurs have also acquired the services of the talented Lucas Moura, but Mauricio Pochettino has hinted that he is unlikely to debut at Anfield. 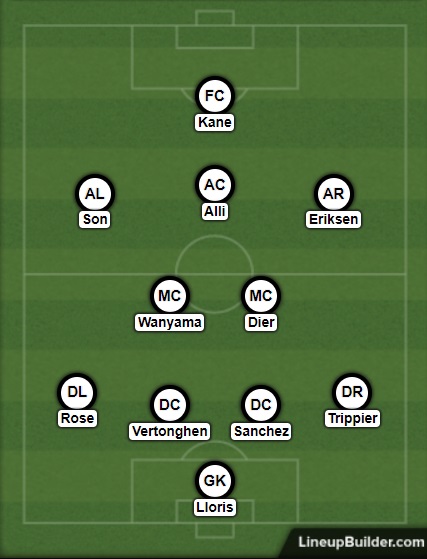 Pochettino claimed in his press conference that his team will be looking to attack Liverpool despite the danger that the Reds present going forward. Whether or not this claim proves to be entirely true will largely dictate the team that starts at Anfield. Alderweireld and Aurier may find themselves on the bench after only just returning, but Danny Rose should come in for Ben Davies after sitting on the bench for the victory over Manchester United. Other than this, Tottenham’s defence should look the same as it did in the previous game. In the midfield, Eric Dier will retain his place while Moussa Dembele could make way for Victor Wanyama if Pochettino decides to sacrifice an attacking option for defensive solidity. Similarly the front four should remain the same for Spurs. However, Moussa Sissoko could be preferred instead of Heung-Min Son due to his ability to get back and assist the defence.

Liverpool will predictably seek to keep the game at a frantic tempo both on and off the ball. It will be vital for the Reds to cut off the supply to Spurs’ formidable attacking players by hounding the likes of Wanyama and Dier, forcing them to commit errors. Salah and Mane will attempt to test the concentration of the Tottenham defence, aided by the movement of Roberto Firmino. Should Rose be missing from the starting lineup, then the task should become somewhat less difficult. If Liverpool can rattle Tottenham early, there’s every chance that this could turn into a repeat of the first 60 minutes against Manchester City.

Tottenham’s approach is certainly less predictable, but they will be confident regardless of the tactics chosen. Harry Kane will undoubtedly be the key if they want to get a result, but the threats of Dele Alli, Christian Eriksen and Son cannot be ignored. Jan Vertonghen is an outstanding centre-back in typically excellent form, but his task at Anfield will be considerably greater than some of the other challenges he’s faced. One of his fiercest challenges surprisingly stems from Liverpool’s defence rather than attack. Van Dijk’s considerable aerial presence could cause Spurs problems as they, like Liverpool, are guilty of conceding cheap goals from set pieces at times.

This is a tough game to call. There’s solid arguments for either side, making a draw distinctly possibile as well. However, there are a number of factors that I believe give Liverpool the edge. Firstly, Liverpool will be out for revenge after the mauling in the reverse fixture. Secondly, Spurs record at Anfield is quite poor, having not won there in over seven years. Lastly, Liverpool would appear to have the stylistic advantage as Spurs do not stack up as well if they were to go ‘toe-to-toe’ with the Reds as the likes of Arsenal and Manchester City tried and failed to do. As long as Liverpool’s defenders remain focused, the likes of Salah, Firmino and hopefully a resurgent Mane should be able to do the rest. Liverpool will run out convincing 3 – 1 winners thanks to a Mane brace and a Firmino clincher overshadowing Kane’s 100th Premier League goal.